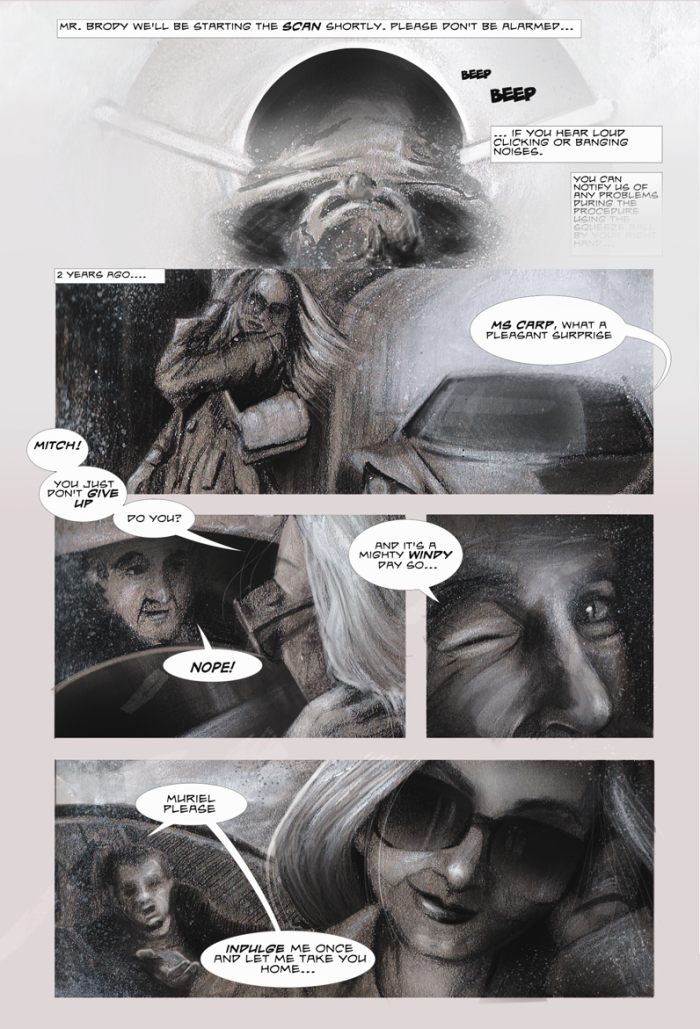 Helping Mitch is an experimental short story and comic. Mitch, who just turned 40, used to run a successful manufacturing business. At the height of a typically stressful week, he was struck by a delivery truck and was never the same again after sustaining brain damage. The story explores the relationship between Mitch and his mother, Sharon, who has taken it upon herself to bring the old Mitch back at any cost.

I think this has been the longest I have gone without posting so far and for that I feel terrible. I’ve been mentally beating myself up for falling behind, not getting it together in time and not keeping my word of keeping a consistent posting schedule.  The delay of the last two weeks has been largely due to rewriting Helping Mitch, dealing with personal issues as well as what I am starting to notice as a pattern of “burnout” at the end of each month. During these burnout periods, I feel rather hopeless and unable to do much else except watch Buffy the Vampire Slayer (the TV series on DVD) from my bed (and eat cookies). What I’ve come to realize is this: although I loooove working on comics I need to pay attention to other areas of my life and start integrating little things that recharge me on a more regularly basis. As the weather gets warmer, I’m looking forward to running outdoors on the trail and going for walks with my friends while having long, meaningful conversations about life. For now, I’ll stop beating myself up because the important thing is to just keep at it despite getting off track.

In the interest of keeping this post short, I’d thought I would give you a glimpse of the process in pictures rather than ramble on and on in words:

Gah! I just noticed, as I type this, that I missed the opportunity to put Muriel’s reflection on the car window and the reflection in her sunglasses to describe more of the surroundings. Definitely something I will come back to and update!

I truly hope you enjoyed reading the fourth page of Helping Mitch and the process behind it. If you have any questions, suggestions and/or comments, please feel free to connect with me through email or in the comments section below.